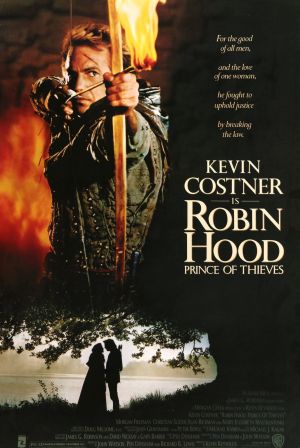 Quick Synopsis… Kevin Costner stars as Sherwood Forest’s outlaw hero in this 1991 version of the classic tale of intrigue, romance and pageantry. When the dastardly Sheriff of Nottingham (Alan Rickman) murders Robin’s father, the legendary archer vows vengeance. To accomplish his mission, Robin joins forces with a band of exiled villagers (and comely Maid Marian), and together they battle to end the evil sheriff’s reign of terror.

So… Is Prince of Thieves a version of the story that you’ve seen? Did you enjoy it? Let me know in the comments below!

Tomorrow’s Easter Sunday and I’ll be traveling, so I’m not sure if I’ll get around to posting anything. But Monday we’ll come back to the A to Z Challenge with the letter S. It’s a movie about an artificially intelligent robot who claims to be alive… Any guesses?

5 thoughts on “A to Z Challenge – Robin Hood: Prince of Thieves”

My Tweets
Follow The Confusing Middle on WordPress.com
Join 2,179 other followers