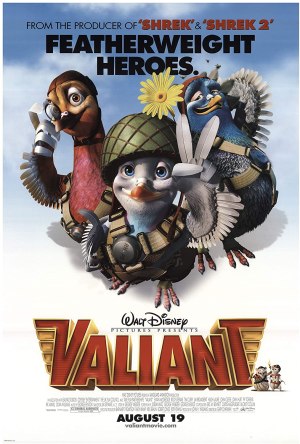 Quick synopsis… The whole world is looking for a hero, and it’s up to a little pigeon named Valiant to bravely step up. Valiant and his friends take to the sky on a wing and a prayer to prove it’s not your wingspan but the size of your spirit that truly counts.

Thanks for stopping in while I participate in this year’s A to Z Challenge. We’re in the home stretch now, with the remaining movies starting on Monday. So you’re welcome to come back for more if that’s the kind of thing you’re into.

Monday’s Disney movie begins with a W and is another animated movie. But this one is actually something kind of great and is another Disney/Pixar collaboration. Any guesses?

8 thoughts on “A to Z Challenge – Valiant”