I know… I was supposed to do a pseudo-tour of my new apartment for the blog a few weeks ago. A couple weeks ago? I can’t remember when.

All I know for sure is that I’ve been putting it off.

For a while, I was postponing the whole thing because I didn’t quite have everything where I wanted it yet. When we get to the photo tour, you’ll see that I still really don’t. At least, not 100%. I’ll get to the explanation for why things aren’t just so when we get there.

So I’m sorry for making promises too soon and delivering too late. I hope you’ve managed to stick with me through the movie reviews and dream stories and random thoughts. Now, without further gilding the lily and with no more ado…

Welcome to my home! 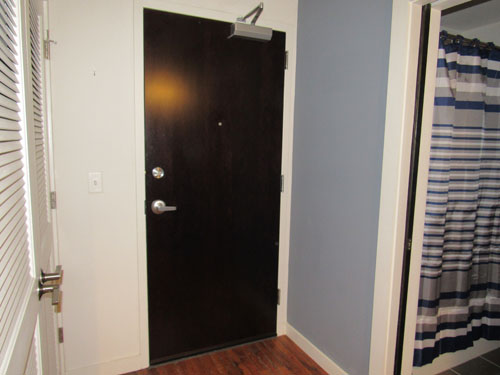 This is my front door. No… that’s a dumb thing to say. This is my only door. Well… the only entrance or exit to my apartment. Which may be concerning if there’s a fire that blocks passage through that door. 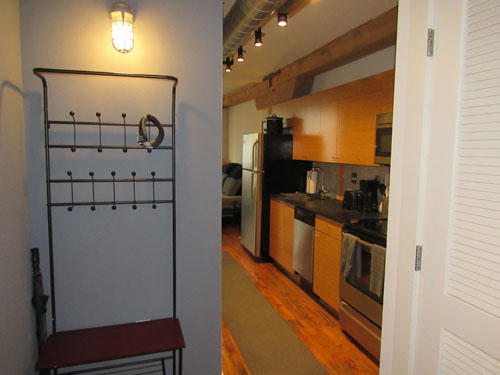 And here’s the view when you first walk in through my front door. My mother was nice enough to supply that bench thing. I’m sure that kind of furniture has an official name. But it’s got places to hang so many multiple coats. You know… for when I have friends over. You know… for when I make some friends. 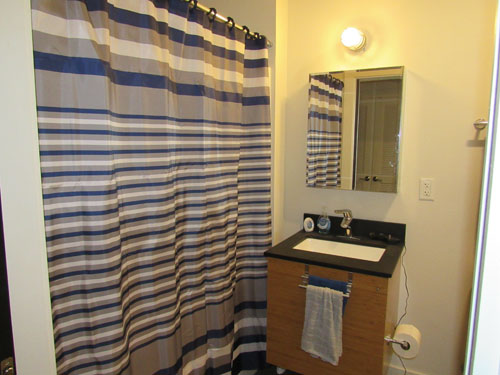 This is the bathroom. You can tell because there’s a shower curtain to hide the bath tub. And can we just go ahead and assume there’s a toilet just out of frame? It’s next to the toilet paper…

Okay, fine… you bunch of weirdos… 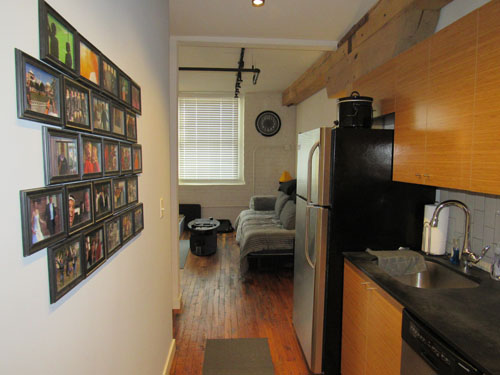 This is my hallway/kitchen. My hallchen. Kitchway? I don’t know. It’s a passageway between the entrance and the rest of the apartment where I also cook my meals. What would you call it?

Here’s another view of the kitchway. Because you couldn’t see my stove in the first shot. 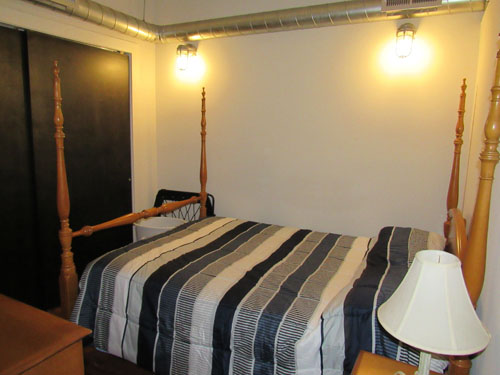 This is where I sleep. I was gonna make a joke about this room being where the “magic happens.” But I’m not allowed to do magic outside of Hogwarts. 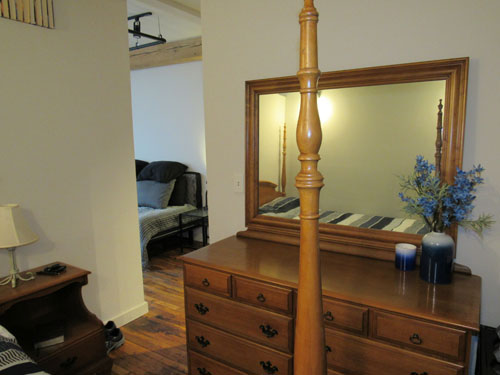 Here’s the view of the magic room from the dirty clothes hamper corner.

If you’ve ever wondered if I’m a big geek, just take a look at this end of my living room. Eagle eyed readers will spot four gaming systems, hundreds of books, three Superman related pictures hanging on the wall, a genuine frame of film from The Empire Strikes Back, and, hidden inside the drawers, many DVDs.

What you can’t see in this image is the gap in the wall, close to the ceiling. This is meant to allow natural light from the windows to leak into the bedroom. I decided to use that as more book storage space.

A quick note about the books… When my mom was helping me unpack, she mentioned that I have too many books. I shook my head and told her there was no such thing. 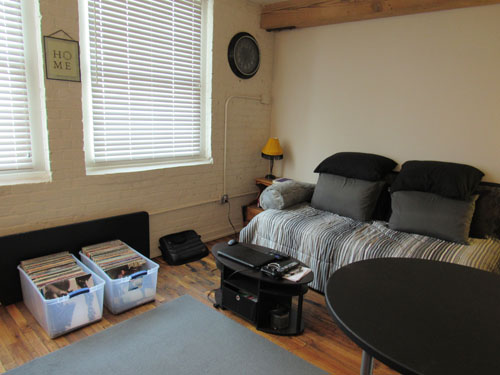 Finally, here’s where I sit most of the time. It used to be my bed. Now it’s my “couch.”

Under the windows, you’ll notice some things that look out of place. Because they are. The two plastic bins are full of vinyl records. It’s kind of a long story… but I sort of inherited them from former roommates. Thing is, I don’t have a record player. And I don’t really want one. So… anyone want a few hundred records? You’ll have to come pick them up. They’re heavy and I really don’t want to try and move them again.

Anyway, once they’re gone and I have a little money to spare, I want to get a real sofa to put under the windows. The sofa can hide that black folding table that’s against the wall. I just figure I need another seating option. Having friends over and inviting them to sit with me on my old twin sized bed seems a little awkward.

There are still some blank spaces on some of the walls, you may have noticed. If you would like to donate something cool for me to hang in my apartment, let me know. I’m not too picky. But I definitely prefer images that reference pop culture… Maybe something along the lines of Back to the Future or Star Wars. I probably have enough Superman stuff.

10 thoughts on “Welcome to My Home”

My Tweets
Follow The Confusing Middle on WordPress.com
Join 2,203 other followers