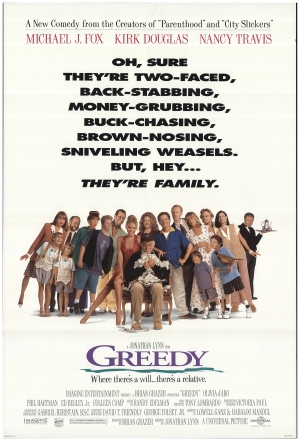 Quick Synopsis… Elderly Uncle Joe (Kirk Douglas) made his fortune as a businessman, and now his heirs are maneuvering to ensure they get their portions of it once he dies. Uncle Joe isn’t too keen on most of his ungrateful family members, though, so they call on the old man’s favorite nephew, Daniel (Michael J. Fox), to make their case. He doesn’t much care about the money, but as his obnoxious relatives gather at Joe’s mansion, Daniel realizes he and the aging millionaire share a contempt for their own family.

It’s really not as funny as it was when I was a kid. Although, if Landon and I get together around the holidays and randomly quote dialogue from this movie, we still crack each other up.

Come back tomorrow for the H movie. Here’s your hint… It’s a pretty decent rom-com from the mid 2000s. Okay… bigger hint. Two words: date doctor. That is all.