A little over a week ago, I began seeing this floating around the internet… 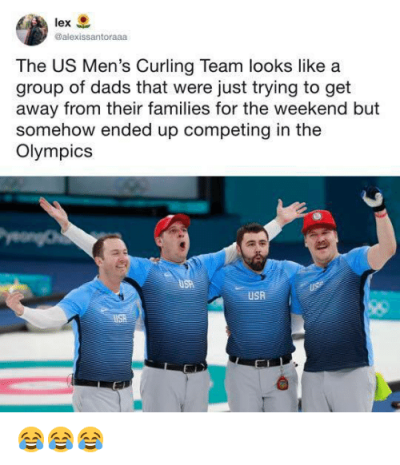 I just want to say to @alexissantoraaa, this is brilliant. And I think it could inspire a hilarious movie. Hear me out…

I picture it starring Jason Bateman, Vince Vaughn, Owen Wilson, and Zach Galifianakis. It could start out with a City Slickers kind of vibe, where one of the guys (probably Bateman) is over stressed and generally unhappy with where he is in life. He tries to insist that he’s not unhappy and that he loves his wife and kids. His friends and even his wife recognize that he needs to get away.

So they plan a trip to Pyeongchang to be spectators at the 2018 Winter Olympics. It was supposed to be one of those once-in-a-lifetime two week vacations. At the airport in South Korea, somehow, in one of those circumstances that only come about in a ridiculous comedy, our group of vacationing dads have their identities mistaken for those of the US Men’s Curling Team.

Meanwhile, the actual Curling Team are detained and deported to Luxembourg by mistake.

Hilarity ensues. You’d have Jason Bateman’s straight man trying to convince the others that they should come clean. Because, “What do we know about curling?” Vince’s character would definitely be the one to talk everyone into going along with it. Zach Galifianakis, the only single guy in the group, would probably fall in love with a woman on the Korean hockey team.

They learn the basics of curling. Turns out, it comes naturally to them. And just when it looks like Jason Bateman is going to walk away before the gold medal round, they have a big reconciliation scene and win gold.

It basically writes itself.

I’d go see that movie. And, at this point, if this is a movie that gets made, I expect myself and @alexissantoraaa to both be handsomely paid for coming up with this story. You got that, Hollywood?