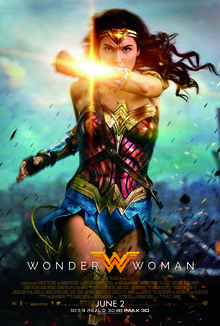 I’m not sure how to properly form words and sentences to convey how excited I am about this movie coming out.

I’ll be going to see it tonight at 7:30 p.m. And then I will experience, what I assume will be, roughly two and a half hours of awesomeness.

Wonder Woman has been around for 76 years. She’s gone through a lot of changes. She’s had her origin played around with more times that Superman. She’s been in cartoons, video games, and even a pretty famous live action TV show. But she’s never been the focus of a major motion picture.

Gal Gadot debuted as Wonder Woman in last year’s Batman v. Superman: Dawn of Justice where she basically stole the show from the two title characters. Seriously, when Wonder Woman appeared on screen to take the lead in facing down the abomination they expect us to accept as Doomsday, everyone in the theater cheered.

Okay, they didn’t cheer. But they should have. I just don’t live in the kind of town where people geek out about movies they way I tend to internally.

I could write an entire post about the DC Extended Universe (what they’re calling their shared cinematic universe). I probably should write one critiquing and defending it. But that’s a subject for another time.

All of the early reviews that I’ve seen for Wonder Woman have been overwhelmingly positive. That’s a huge relief, considering that the last two DC films have received abysmal reviews in the weeks leading up to their releases. Those positive reviews make this premiere even more exciting.

There’s been talk of the race between Marvel and DC and who would release the first female led superhero movie. Have they forgotten Supergirl? Catwoman? Elektra?

I’ll share my thoughts on Wonder Woman after I see it. Maybe I’ll go ahead and include my defense of the DCEU, as well. It’ll be my attempt to quiet all the haters that believe Marvel can do no wrong.

One thought on “Before Seeing Wonder Woman”