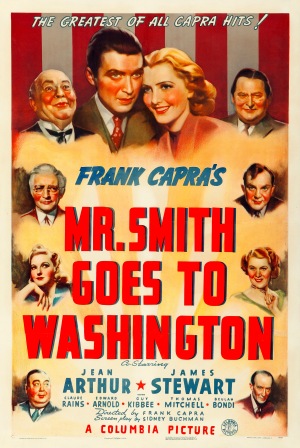 Quick synopsis… When idealistic junior senator Jefferson Smith (James Stewart) arrives in Washington, D.C., he’s full of plans and dazzled by his surroundings — qualities he retains despite widespread corruption among his cynical colleagues. Jean Arthur puts in a sharp performance as Smith’s streetwise secretary, who helps him navigate his way through Congress, in this Academy Award-winning classic from director Frank Capra.

Next week we’ll keep the countdown going with #24 – Parenthood. That’s right, there was a movie long before there was a TV show. And it’s a movie that anyone studying family dynamics should be forced to watch.

One thought on “My Favorite Movies #25 – Mr. Smith Goes to Washington”