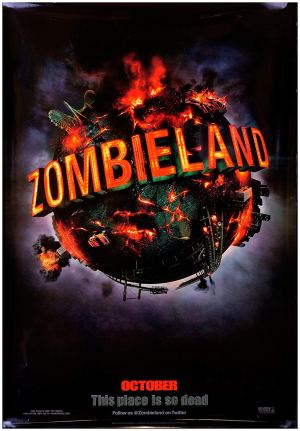 Quick Synopsis… Looking to survive in a world taken over by zombies, a dorky college student teams with an urban roughneck and two grifter sisters. But after making their way to an allegedly safe Los Angeles amusement park, the quartet learns that no place is safe.

Personally, I’m looking forward to Zombieland: Double Tap, coming out later this year. The whole cast is coming back for the sequel, including Bill Murray. Not sure how that’s gonna work, but I’m down.

Folks, that’s the end of the A to Z Challenge for 2019. I had fun. I hope you did, too. I’m already thinking about what I might do for next year’s challenge. More movies? Maybe limit myself to Disney movies or something… I don’t know. Maybe I won’t do movies at all.

I’m gonna take the rest of the week off. But then I’ll post again on Monday and get back into my top 100 movie countdown. Where did I even leave off? Avengers, I think… Have a great week, kids!

5 thoughts on “A to Z Challenge – Zombieland”