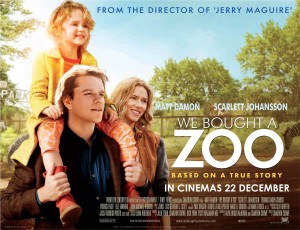 We Bought a Zoo

Quick Synopsis… In this adaptation of Benjamin Mee’s memoir about buying and saving a run-down zoo, the locale shifts from Britain to southern California. However, the wacky spirit of the original is retained, complete with escaped tigers and a zoo crew of misfits.

If you have seen We Bought a Zoo, what did you think? We’re in the home stretch of this challenge and tomorrow’s X movie. No… not X-rated movie. Just starts with an X. Wanna take a guess at the title without any hints?

6 thoughts on “A to Z Challenge – We Bought a Zoo”