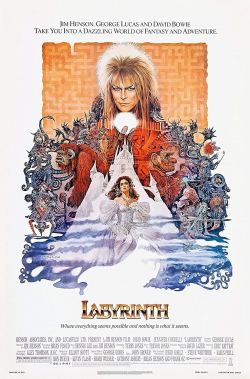 Netflix says… In this Jim Henson-directed fantasy, teenage Sarah (Jennifer Connelly) embarks on a life-altering quest when she attempts to rescue her little brother, Toby (Toby Froud), from the clutches of treacherous Jareth the Goblin King (David Bowie), who lives in a castle surrounded by a giant labyrinth. With just 13 hours to plot a course through the dangerous maze, Sarah must grow up fast, learn her responsibilities and muster supreme courage.

Overall, Labyrinth has a bit of a Wizard of Oz quality to it. A girl is lost in a strange world and she relies on the help of a handful of rag tag friends to complete her quest before she can return home… Maybe that’s why I like it so much, since The Wizard of Oz is a movie that ranks pretty high on my top 100 list and the book is my favorite book of all time.

Come back next week for a classic that’s also on the AFI list, 12 Angry Men.

One thought on “My Favorite Movies #82 – Labyrinth”