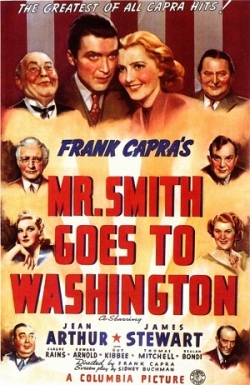 Netflix says… When idealistic junior senator Jefferson Smith (James Stewart) arrives in Washington, D.C., he’s full of plans and dazzled by his surroundings–qualities he retains despite widespread corruption among his cynical colleagues. Jean Arthur puts in a sharp performance as Smith’s streetwise secretary, who helps him navigate his way through Congress, in this Academy Award-winning classic from director Frank Capra.

Y’all, I love this movie. In spite of the corruption depicted, the film is optimistic. It’s idealistic. I watch Stewart’s Jeff Smith take his first steps into Washington and I’m filled with the kind of awe and wonder that I remember having as a kid the first time I laid eyes on all those beautiful monuments and memorials. It’s easy to become disillusioned when we watch the news and see how politicians act in real life. To see it through the lens of optimistic Jefferson Smith is kind of refreshing. At least, it will be until next time I turn on Meet the Press.

My Tweets
Follow The Confusing Middle on WordPress.com
Join 2,171 other followers