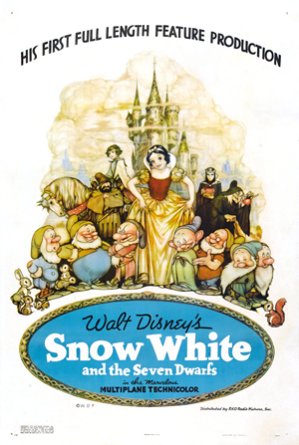 Snow White and the Seven Dwarfs

Netflix says… Walt Disney broke new ground in 1937 with this animated feature-length film, based on the famous fairy tale collected by the Brothers Grimm, about a jealous queen, her beautiful stepdaughter, seven lovable dwarfs and a handsome prince. The Oscar-nominated classic includes the songs “Whistle While You Work,” “Heigh-Ho” and “Some Day My Prince Will Come” (which became a jazz standard via trumpeter Miles Davis in the 1950s).

This is interesting… Snow White and the Seven Dwarfs is one of the classic Disney movies that opens with a storybook. Unlike a lot of movies you see these days, the creators of this one assume the audience is intelligent enough to read the words on the first two pages of the book for themselves. There is no voice over reading the intro. I appreciate that. That being said, this movie is all kinds of dark. I know it’s rated G, but there’s no way this should be considered a kids movie. There is a lot of terrifying imagery that I think would scare your average kid. Between the princess getting lost in the woods and the queen transforming in her final attempt to murder a 14-year-old girl, I don’t know how a kindergartner would make it through this thing. But I won’t dispute it’s place in the AFI list. It’s a groundbreaking film and it’s a classic that has just about stood the test of time.