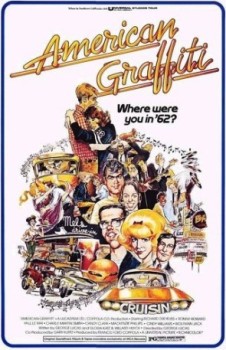 Netflix says… Showcasing then-Hollywood-newcomers Harrison Ford, Richard Dreyfuss and Ron Howard, director George Lucas weaves together the stories of a disparate group of teenagers as they struggle with adolescent rites of passage in 1962. On the night before two of them leave for college, four high school buddies cruise their small hometown finding love and mischief in this Oscar-nominated coming-of-age classic.

Ah, nostalgia. From the guy who would one day bring us Star Wars and Indiana Jones. Which, in their own right are highly nostalgic films. Especially for those of us who were kids when they originally came out. I don’t feel a lot of nostalgia watching American Graffiti though. That doesn’t mean I don’t like the movie. It just means I have a hard time identifying with the culture of the early ’60s. Not that I mind trying. I love the music of those days and have always been a big fan of this movie’s soundtrack. It was one that we had when I was growing up. It contained so many oldies that it needed to be packaged as a double CD. Which, as a kid, I thought was awesome. That’s right, as a kid, I loved listening to the classic hits of the late ’50s and early ’60s. Still do from time to time. Anyway, I find this to be a pretty decent movie. The kind of story that unfolds over the course of a single night, like so many ’80s movies would later attempt. Good times. Great oldies.

One thought on “AFI #62 – American Graffiti”