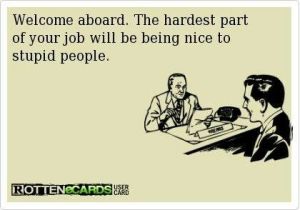 As someone who worked with the general public, I came across my fair share of crazy people. I saw them in Raleigh and grew to recognize them whenever they came in the door. After a while, they became easy to spot. It took some time after I transferred back to Virginia, but they eventually came out of the woodwork.

Take one example from a day at the bank. Please, bear in mind that I’ll be keeping this as anonymous as possible. That being said, this guy would put some of my craziest customers from Raleigh to shame.

His day started by coming into the branch and asking why his deposit had not shown up in his account yet. As he explained things, he mailed in two checks with a deposit ticket. Now, I’m not sure the bank’s official stance on mailing in deposits. Personally, I would advise against it. There are way too many things that could go wrong. These things wouldn’t be the fault of the customer or the bank. There’s a lot riding on the Postal Service and their ability to get your deposit to the bank in a timely fashion.

I didn’t see the crazy guy. I didn’t officially meet him. But I heard his conversation from the back room. One of my coworkers explained to him that we don’t check our PO box every day, but that the branch downtown does check theirs on a regular basis. After some digging, it turned out that he sent his deposit to the downtown branch anyway. He left, his problem slightly unresolved, but we figured that was the end of it. At least, for our part. After all, his deposit was sent downtown. It becomes an issue between the crazy customer and that branch, right?

So much for wishful thinking. He called us about a dozen times that afternoon. About half of those times, I was the one lucky enough to answer the phone. Each time, he didn’t seem to remember who I was. I only say that because he felt compelled to explain his situation each and every time. But I’m getting ahead of myself.

The first time I spoke to him, he started making demands of me right off the bat. Didn’t give me his name or any other identifying information. He just started asking me questions about his account. When I asked for his name, he gave it to me in a huff and sounded as if it was a ridiculous notion that I didn’t know him innately. After all, he’s the future President of the United States. True story: this man has run, and will run again, for the office of president. It’s good to know who I won’t be voting for this year.

Anyway, I couldn’t understand him when he said his name. I couldn’t make out his first or last name. So I asked for his social. At that point he just yelled that the computer would give it to me. Yeah, it would. If I had another way to look him up, but since his speech was slurred and incoherent, I couldn’t use his name. By this point, my patience was starting to wear a little thin, but I was faking polite pretty well. Oh, and he still hadn’t explained his problem all the way through yet. We were only a minute or so into that first phone call.

Finally, he began explaining what was wrong. It turned out I wasn’t the first one he’d told this to over the phone. So, if you’re keeping track, he came into the branch and he had also called a number of times already. This time he got me on the phone to listen to his tale of woe. As he told it, he sent two checks to that branch downtown. One of those checks was deposited into his account. The other check, for a larger amount, had vanished. He swore that the larger check was included on the deposit ticket that he sent with the checks. So his accusation sounded as if the bank employee that ran the deposit had taken that larger check and had a good ol’ time with the money.

He told me this story several times. For some reason, he got the impression that I wasn’t paying attention to him. Believe me, that was not the case. I was paying attention. I just wasn’t giving him a satisfying answer. And I’m not sure what answer would have satisfied him. I wanted to ask him if he wanted me to drive downtown to ask the employee in person if she had, in fact, stolen his check and had a good ol’ time with the money. But I was afraid that would come across as scathingly sarcastic. So he asked me to repeat what he had explained to me.

“Mr. Crazy, you’re accusing the downtown bank employee of stealing your check. Is that right?”

He responded, loudly and angrily, “No! I’m not accusing anyone of stealing my money!”

“Yeah, you kinda are,” I said, maintaining my calm. Though I’m not sure how I was staying calm. Back in Raleigh, I’d have definitely kicked something by this point.

Thankfully, my assistant manager rescued me from this endlessly cycling phone call. She had spoken with him before and knew the situation. From what I heard on her side of the conversation, he didn’t tell her anything new. But she told him something new: that he should call the company that wrote him the check to see if it had cleared their bank. Her hope was that it would deflect him and that he would stop bothering us.

It was a good idea, but it didn’t really work. He called five or six more times after that. Each time I answered for him, he started all over again, explaining the situation to me as if I hadn’t heard it before, still expecting some positive result from me. Note: this is the very definition of insanity.

Later, my manager showed me letterhead from this man’s “business.” And you know how some businesses will list some of their responsibilities under the title of their business? Like law offices might list that they specialize in chasing ambulances, that kind of thing. This guy had about ten items listed under his business name. These are the reasons you would call him and enlist his services. Some made a sort of sense. You’d expect to see things like “home improvement” or “janitorial services” for a legitimate business. Would you expect to see “monorail passenger”?

I had no idea that I could list monorail passenger as an important accomplishment in my life. After all, I’ve been to DisneyWorld. But if monorail passenger is so important, can I list the fact that I’ve been on a boat? I’ve been on a plane, does that count for something? Oh, and I have my very own driver’s license! Do you know what that means? I am legally capable of operating a motor vehicle! I really need to update my resume. Thanks to this crazy dude, I now have so much untapped potential that I never even knew I had!

My Tweets
Follow The Confusing Middle on WordPress.com
Join 2,171 other followers