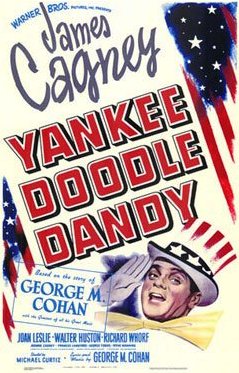 Netflix says: James Cagney won the Best Actor Oscar for his lively portrayal of “Mr. Broadway,” George M. Cohan, in this lavish screen biography that highlights Cagney in some of his finest song-and-dance routines. Cohan, a playwright, entertainer, composer and patriot, made his mark on the vaudeville stage and penned countless memorable tunes, including “Over There,” “It’s a Grand Old Flag,” “Give My Regards to Broadway” and the film’s rousing title number.

Up until now, I’ve never seen a single film with James Cagney. I know the name, I’ve seen people do impersonations over the years, I’ve just never seen anything that he’s been in. It’s not that I don’t like to watch old movies. That’s really not my problem. I’ve known people who refuse to watch movies if they’re filmed in black and white. I’m not that way at all. Sadly, I just never turn on Turner Classic Movies to watch the older films. Yankee Doodle Dandy is a movie that I wasn’t really looking forward to getting to on the list, even though it’s just third from the bottom. And that’s only because I didn’t know much about it. I didn’t know it was based on the life of a real person. I didn’t know it contained a number of songs that I’d heard countless times over the years. I didn’t know that Cagney could dance. That’s probably something I would have known if I’d seen more of his pictures. Some of the times when he’s dancing on the stage, he looks a little like a marionette whose strings have been cut. Not saying that’s bad, his movement is just kind of crazy. The character that Cagney portrayed was an incredibly patriotic individual and it showed in nearly all of his work. His life story is told as a lead up to President Roosevelt presenting him with the Congressional Medal of Honor in the end. Does that count as a spoiler if the movie was released over 70 years ago? I hope I didn’t just ruin it for you.