I’m sure many of you out there have seen the Disney animated classic Beauty and the Beast. As cartoons go, it’s one of my favorites. But I’ve decided that I have a slight problem with a couple scenes in the movie. This happens for me with a lot of movies I’ve seen multiple times.

There’s a scene where Belle is frightened by the Beast and she runs away from the castle. She and her horse are quickly attacked by a large pack of wolves. Luckily she’s saved by the Beast, who then collapses from the injuries he’s sustained during his fight with the wolf pack. The next thing we see is the Beast lying slumped over the horse’s back while Belle leads them back to the castle.

How did the unconscious Beast get into that position on top of the horse? Am I to believe that Belle was capable of lifting a 500 pound monster onto her horse?

Later, during the climax of the film, the Beast is stabbed in the back by the bad guy. The pompous Gaston then falls into a ravine (which just seems like a horrible place to build a castle). And the Beast almost falls backwards, too, but then the incredibly strong Bell is able to save him by grabbing a handful of his cloak, pulling him back onto the balcony. 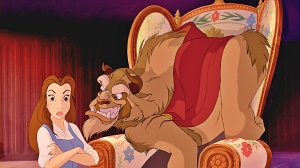 “I don’t need this crap! I have super strength! I’m gonna be a well-read super-hero!”

If she’s that strong, why couldn’t she fight off those wolves herself? How was Gaston able to manhandle her and her father when he went on his Beast-killing rampage? It just doesn’t make any sense, Disney!

3 thoughts on “Feats of Strength”

My Tweets
Follow The Confusing Middle on WordPress.com
Join 2,209 other subscribers