Kids, we are officially into the top 10! It’s been a long journey, but there’s light at the end of the tunnel. For those of you who have been with me from #100 – Ben-Hur, thanks for sticking it out. And if you’ve enjoyed these blog posts, stay tuned. I’ve been asked to participate in a podcast that takes a look at each of the AFI top 100 movies. The first episode will be available soon. I’ll post a link as soon as it’s up. 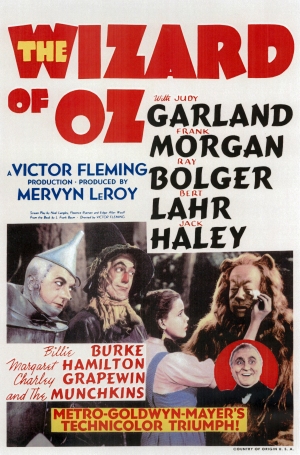 The Wizard of Oz

Netflix says… There’s no place like home for young Dorothy (Judy Garland), who’s been swept away from her farm in Kansas to a wonderland of munchkins, flying monkeys and different-colored horses. She must follow the Yellow Brick Road to the all-knowing Wizard of Oz to find her way home. Along the way, she meets the Scarecrow (Ray Bolger), the Tin Man (Jack Haley) and the Cowardly Lion (Bert Lahr), who help her fend off the Wicked Witch of the West (Margaret Hamilton).

Get ready for this particular post to be longer than the usual AFI entry. Because The Wizard of Oz is not only one of my favorite movies of all time, it’s based on my favorite book of all time. And it’s kind of hard to believe that The Wonderful Wizard of Oz was first published nearly 40 years prior to this movie being made. Still holds up today.

Growing up, this was one of those movies that was shown on network TV annually. If I remember correctly, it came on around Easter each year. I might be off on that. But I remember it being a big deal when it came on. Because that was before they had released it on home video. And it was before Ted Turner bought the rights to show it exclusively on his cable networks. After that, it was on TV several times a month and, when it wasn’t, we could shove the VHS tape into the VCR.

I know that I’ve written more than one post about this movie in the past, either on this blog or my previous blog. So if any of what I say sounds redundant, I’m sorry. I’ve been blogging in one form or another for over a decade. Sometimes these things run together.

I question the goodness of Glinda in this movie. Which kind of makes Wicked make all the more sense. She greets Dorothy by asking if she’s a good witch or a bad witch. Dorothy says she’s not a witch at all, explaining that witches are old and ugly. Then Glinda says only bad witches are ugly. So… what are you saying about poor Dorothy’s looks?

Staying on the topic of Glinda the “good…” Her first words about Elphaba is that she’s worse than the Witch of the East. Then she reminds the witch about the ruby slippers. What makes her think it’s a good idea to magic those slippers onto Dorothy’s feet? She knows the Wicked Witch of the West wants them. She knows she’d kill to get them. So putting them on Dorothy’s feet is like painting a big old bullseye on Dorothy’s back. 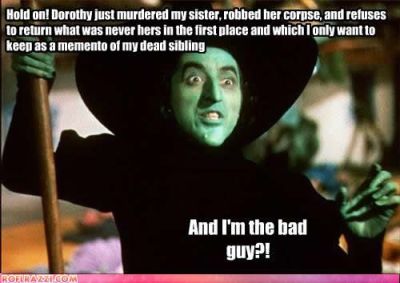 Then she tells Dorothy, “I’m afraid you’ve made rather a bad enemy out of the Wicked Witch of the West.” What do you mean Dorothy’s made a bad enemy out of her?! Glinda is the one who antagonized her and put Dorothy in the spotlight. “So I’m just gonna float away in my pink bubble while you go on a dangerous journey through a strange land where you’ll encounter God-knows-what! Say hi to the Wizard for me!”

By the way, anyone else think the munchkin in the purples robes is a complete buzzkill? He’s the jerk that shows up at business meetings without anything positive to contribute. He just stands up with his copy of Robert’s Rules of Order and shouts, “Point of order!” He questions the legality of the witch’s death. Then, as the mayor is declaring a holiday for the munchkins and their descendants, purple robe guy interrupts with, “If any!” You think, now that your tyrant Wicked Witch of the East is dead, your family lines are all just gonna end? Someone needs to slap that dude.

In the song, “We’re Off to See the Wizard,” there’s a line that talks about the wonderful things he (the Wizard) does. What wonderful things does the Wizard do? Spoiler alert: he’s a reclusive old man. But even if he was the almighty wizard that he leads people to believe, he never grants an audience to anyone. “Not nobody! Not no how!” screams the guard.

I do love the music in this movie. There are often times I’ll find myself singing “If I Only Had a Brain” randomly. And “Somewhere Over the Rainbow” has got to be one of the greatest songs of all time.

The Scarecrow is a conundrum. His body mechanics just don’t make any sense. One second, he seems completely incapable of standing on his own two feet. The next, he’s dancing a well-choreographed jig. And for someone who claims to have no brain, he’s awfully manipulative with the talking apple trees. I think he’s smarter than he lets on.

Honestly, there’s a ton more that I could say about this movie, but you should really just watch it. But before I end things, let’s get back to Glinda’s role in the movie as she reappears at the end. Dorothy’s been left behind because the Wizard is a fraud and doesn’t even know how to work the hot air balloon that brought him to Oz in the first place. So Glinda arrives to tell Dorothy she’s had the power to get home the whole time strapped to her feet.

That’s great and all, but I don’t buy it. Because as Dorothy clicks her heels together and chants, “There’s no place like home…” Glinda is waving her wand behind Dorothy’s head. I think Glinda uses her own magic to wake Dorothy from her concussion. The shoes did nothing!

I think it’s interesting to note that all of the major players in Oz had counterparts in the real world. Meaning that, in the context of the movie, Dorothy’s mind created characters in Oz based on people she actually knew. Except for Glinda. She has no counterpart in the real world. Maybe I’ve watched too much Supernatural over the years, but I think that can only mean that Dorothy is possessed by a dreamwalking demon of some kind.

But there’s a lesson to be learned. As Dorothy puts it, if she ever needs to go looking for her heart’s desire, she should just look in her own back yard. And if it can’t be found there, it’s not worth looking for in the first place. Great lesson to walk away with, y’all. “Your dreams are just too big! Never leave home!”

My Tweets
Follow The Confusing Middle on WordPress.com
Join 2,198 other followers