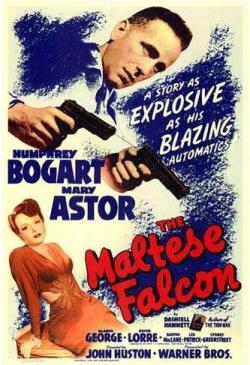 Netflix says… Humphrey Bogart stars as private eye Sam Spade in this Oscar-nominated noir classic that finds the sultry Miss Wonderly (Mary Astor) seeking out protection from a man named Thursby. Spade’s partner (Jerome Cowan) takes the case–but he winds up dead, along with Thursby. Spade’s subsequent hunt for the killer leads him into a world of deception and double-crossing, as a trio of criminals searches for a priceless statue known as the Maltese Falcon.

Well, what can I say about The Maltese Falcon? I’ve never found myself drawn to film noir. It’s not that I don’t like it. I just don’t take a lot of opportunities to watch films of that genre. I’ve always heard positive things about this one. And I thought it was good. Definitely had enough twists to keep it interesting. But I won’t be including it my personal top 100.