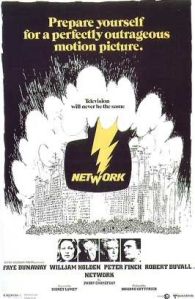 Well, it’s nice to finally say I’ve seen the actual source of the line, “I’m mad as hell and I’m not gonna take it anymore!” I think that’s one of those lines that’s been used and parodied over and over again. On the whole, this movie didn’t really do much for me. It was kind of bizarre in my opinion. Not one I’ll be watching repeatedly.