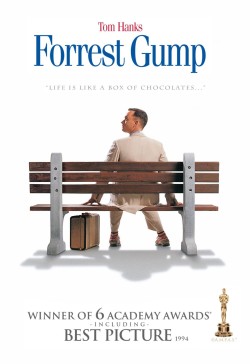 Netflix says: Winner of six Academy Awards, including Best Picture, director Robert Zemeckis’s charming blend of comedy and drama stars Tom Hanks as Forrest Gump, a simpleminded man who finds himself in the middle of nearly every major event of the 1960s and ’70s. Along the way he makes friends, changes lives and searches for a soul mate. Hanks nabbed a Best Actor Oscar for his remarkable portrayal of this unsophisticated yet surprisingly wise Forrest.

Ever since this movie first came out, it’s been one of my favorite movies. I think Tom Hanks is great in it. I think the story is awesome. I love how this one guy finds himself in so many historical situations, just through simple luck. My grandmother used to love this movie, too. Whenever I saw her, she would get me to do a Forrest Gump impression. And she took it to another level. Several years after the movie was released, she had me record the outgoing message on her answering machine as Forrest Gump. That has nothing to do with what I think of the movie, just a little personal note. It’s a great movie, and if you haven’t seen it, shame on you.