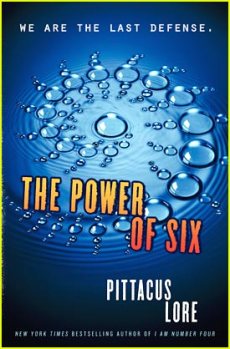 Title: The Power of Six

I actually finished reading this a few weeks ago. I’ve just been playing catch up when it comes to posting these book reviews. There’s a lot going on. But this post isn’t about how much I’ve been slacking on getting blog posts written and posted in a timely fashion.

The Power of Six is the sequel to I Am Number Four, the story of aliens among us. Naturally, the story continues right where the last book left off. Except we come at it from the perspective of an entirely new character.

At the start of the novel, we’re introduced to Marina, who is actually Number Seven. She’s living in an orphanage in Spain and is keeping close tabs on John Smith’s (Number Four’s) plight via the internet. She’s not happy about living in an orphanage in Spain. What I found odd about this town in Spain is that no one seemed to speak Spanish. But I don’t think that’s why she didn’t like it there.

Her guardian, Adelina, pretty much turned her back on their Loric heritage. She had become a nun. Well, if not an actual nun, practically a nun. Not that there’s anything wrong with one’s choice to pursue God full-time. She just happened to ignore the fact that she and her charge were kind of in the middle of a war. Made things a little complicated for the girl who was developing secret super powers.

The book switches back and forth between Marina’s and John’s perspectives. While Marina is dealing with her problems in a Spanish orphanage, John and his fellow fugitives are on the run. He’s making his way around the country with his human friend Sam and Number Six, the Loric Garde member who showed up in time for the epic battle that demolished a high school in the previous book. That’s why they’re on the run. While the human powers that be don’t know about Number Six, they do believe that Number Four is a terrorist and that he has either kidnapped Sam or coerced him to help in his unholy quest for global domination.

Things get complicated for the trio. As tends to happen in novels involving teenagers, a love triangle develops. It’s old. It’s played out. Seems pretty standard when it comes to the young adult fiction. Meanwhile, Marina’s world gets kind of rocked when she’s joined by the tenth member of the Loric Garde, a girl that none of the original nine knew existed. At least, that’s the way I’ve read things thus far. They have their own epic battle as they make their way out of the Spanish town.

I don’t want to give anything else away. It was a pretty decent read. I thought it progressed the overall story nicely. And I do look forward to the next installment.

One thought on “The Power of Six”