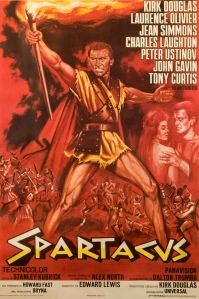 Netflix says… Stanley Kubrick directed this epic saga based on ancient events, chronicling the birth of a vagabond slave-army led by an ex-gladiator named Spartacus (Kirk Douglas) that threatens the sovereignty of all-might Rome. This film has everything including a wonderfully funny (and Oscar-winning) performance by Peter Ustinov as the cowardly owner of a gladiator school. Laurence Olivier, Charles Laughton, Jean Simmons and Tony Curtis co-star.

Here’s one I thought I would really enjoy. Turns out, it didn’t do much for me. See, I loved Gladiator. It was awesome and epic and I naturally assumed I would like Spartacus in the same way. After all, I kind of viewed this as Gladiator‘s intellectual father. Or maybe grandfather. Don’t get me wrong, it was a pretty decent movie. Just not as great as I had been expecting. Maybe I simply oversold it to myself and was disappointed with the actual product. Maybe I was just waiting around for Jean Simmons to paint her face and sing about how she wanted to rock and roll all night and party every day and that just never happened. See what I did there? I made a KISS joke. ‘Cause the names Jean and Gene sound the same. Get it? Shut up, you know it was funny.