It’s Leap Day! So why not celebrate with a top 10 list focusing on the best episodes from the gone-too-soon sci-fi classic, Quantum Leap. If you’re unfamiliar with the show, it featured Scott Bakula as Dr. Sam Beckett, who theorized that one could time travel within his own lifetime. In the pilot episode, he stepped into the Quantum Leap Accelerator and vanished. He awoke to find himself trapped in the past, facing mirror images that were not his own, and driven by an unknown force to change history for the better. His only guide on this journey was Al (Dean Stockwell), who appeared in the form of a hologram that only Sam could see and hear. And, so, Dr. Beckett found himself leaping from life to life, striving to put right what once went wrong, and hoping each time that his next leap would be the leap home.

10. The Leap Between the States

This is the one where Sam ended up as a union soldier who is injured in the South during the Civil War. The premise of the series is that Sam can only time travel within his own lifetime. That being the case, how is it possible for a guy born in the 1950s to land somewhere in the 1860s? The loophole occurred when Sam leaped into his own great-grandfather. Apparently the DNA was similar enough to get things confused in Sam’s lifespan equations. I don’t know… I know nothing about fictional quantum physics.

9. Deliver Us From Evil

During the final season of the show, it turned out Sam was not the only time traveler leaping around out there. While Sam was working to put right what once went wrong, this Evil Leaper was putting wrong the things that went right. Sam leaps back into someone that he had previously leaped into (Jimmy). It’s confusing for our hero as to why he would leap back when everything was fine the last time he leaped out. Sam finds out that he’s back because the Evil Leaper had arrived to stir up trouble. This episode introduced a fascinating concept that I wish had been further explored (if the show had not been canceled!).

Sam leaps into a TV reporter in San Francisco who is covering a serial killer. When the police bring in a psychic, it turns out that she can see Sam for who he really is and not as the reporter. Because of this, it allows Sam to be himself around her and he ends up falling in love during the time that he’s there. It’s kind of sad when Sam finally accomplishes what he’s there to do and has to leap away.

Did this episode actually happen? The whole thing turns out to be a dream. But in Sam’s dream, he encounters the devil, who is really unhappy about Sam leaping around in time putting right what he claims to have put wrong. It’s kind of a Halloween themed episode that some fans claim is actually a cursed episode. Apparently someone’s VHS copy exploded or something.

On the surface, this is an episode about saving the life of a police officer. Scratch that surface, and it’s about Sam’s unwillingness to help Al, his holographic friend from the future. When Sam leaps into a cop who happens to be in the same time and place as Al’s first wife, Al insists that he’s there to convince Beth to wait for Al, who is, at this point in history, missing in action in Vietnam. Sam repeatedly expresses that they’re not allowed to alter their personal histories using Project Quantum Leap. It’s really selfish of Sam, considering…

In the very next episode, Sam leaps into his younger self. He’s back in high school and the artificial intelligence running Quantum Leap determines that he’s there to help his basketball team win the state championship game, which they lost in the original history. But, while he’s there, Sam decides he’ll change some things in his personal life. He wants to change his father’s lifestyle so he won’t die of a heart attack a few years later. He wants to convince his little sister to avoid marrying an abusive man in the future. Finally, he wants to keep his brother, Tom, from dying in Vietnam only a few months later. So, it’s okay for Sam to try and change his own life, but for Al, it was against the rules. Very selfish, Dr. Beckett.

Sam leaps into a mental patient at the moment he is being given unauthorized shock therapy. This really messes with Sam’s psyche and he begins cycling through several of the personalities that he has leaped into throughout the series. For a while, Sam loses touch with reality and, in turn, loses touch with Al. There’s a chance that he could lose contact with the future and get stuck where and when he is. It all leads to Sam being shocked once again, which causes a malfunction during the leap… 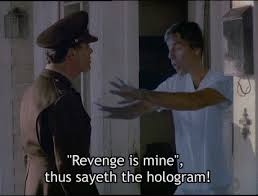 …Causing Sam and Al to switch places. Sam becomes the hologram and Al leaps into a World War II vet who’s just returned home. Sam gets to enjoy some time in the future while assisting Al in the same way that Al has assisted Sam over the years. But it doesn’t stay this way for long. When Al’s life is threatened, Sam realizes the only way for him to save his friend is to step back into the Quantum Leap Accelerator and leap into Al. So by the end of the episode, they return to the status quo.

Sam leaps into a Louisiana defense attorney tasked with helping a young black woman who has been wrongly accused of first degree murder. This woman worked for the family of the most powerful man in their small town and had suffered at the hands of this man’s son, who had repeatedly raped and beaten her throughout her life. Throughout the episode, Sam misunderstands the situation, expecting that she killed the son through self defense. He succeeds in having the charges dropped, but there’s a pretty big twist at the end. If you haven’t seen this episode, I won’t spoil it. I’m just gonna suggest you get on the Netflix and watch it when you get a chance.

I wasn’t sure about making this one number one. In fact, there’s a part of me that wants to switch it with “So Help Me God.” This is the episode that turned out to be the series finale for Quantum Leap. I say turned out because that wasn’t the plan. This episode was intended to be the 5th season finale, with plans for a 6th season well under way. Sam leaps, inexplicably, into himself. But not in the future. Somehow, he winds up in Pennsylvania on the day he was born. He’s confronted with a seemingly omniscient bartender who he believes may be God… or at least some supernatural being who has been controlling his leaps through time. But this bartender, also named Al, tells Sam that he’s the one in charge. Sam could go home any time he wanted to. Sam realizes that he needs to put right a wrong that he missed out on a long time ago. He controls his leap and goes back to see Beth, Al’s first wife, and tells her that Al is alive and is coming home. Because NBC pulled the plug at the last second, the ending we get is a caption across a black screen explaining that Dr. Sam Beckett never made it home. What the heck!?

3 thoughts on “The Top 10 Episodes of Quantum Leap”