The Single Guy wasn’t looking for love at the drive through window. He’d been down that road. Well, not completely down that road. But he started down that road and found construction signs and road blocks. When it came to the Girl in the White SUV, there was too much work to be done and the Single Guy felt that he put forth all the effort that he needed to.

But that doesn’t mean that attractive women just stopped going to the Single Guy’s bank. They certainly didn’t stop driving up to the drive through. White SUV may have stopped, but she wasn’t the only beautiful woman in the world. Or even in the Raleigh area.

For a while, the Single Guy had an attractive customer come to the drive through window. She was a regular who dropped by about once a week, usually on Fridays. She cashed her paycheck, then deposited part of that cash into her account. It was a routine.

The Single Guy didn’t know what kind of car she normally drove, but he did notice one detail: an NC State decal on the back window. When she came through on one of those Fridays, he noticed that the decal was gone. He noticed that it was a newer car. So he asked, “Did you get a new car?” The Single Guy was nothing if he wasn’t a brilliant conversationalist.

The question led into a conversation about how she ran a red light, got in an accident, yadda yadda yadda, she was driving a rental. The Single Guy cashed her check as normal. When she passed back some of the cash and her deposit ticket, she included a small package of candy. “Those are some really good candies for you!”

The Single Guy was taken aback. It isn’t that he had never received foodstuffs from customers before. It’s just that, usually, the gifts he received amounted to Slim Jims and fun-sized candy bars from scary older women. But even those are few and far between. This was a welcome gift of Starburst Gummies. 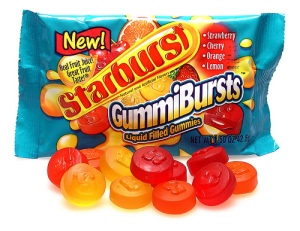 The Single Guy didn’t expect anything more than this. As stated above, he wasn’t looking for relationship material at the drive through anymore. But it did make him feel good to receive an unsolicited gift from an attractive young woman. It wasn’t something something he was used to. It certainly felt better than being the guy who dropped $50 on a floral arrangement, never hearing from the recipient again. The shoe, it would seem, was on the other side of the table!