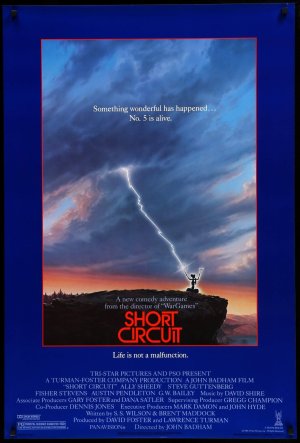 Quick Synopsis… After a lightning bolt zaps a robot named Number 5, the lovable machine starts to think he’s human and escapes the lab. Hot on his trail is his designer, Newton (Steve Guttenberg), who hopes to get to Number 5 before the military does. In the meantime, a spunky animal lover (Ally Sheedy) mistakes the robot for an alien and takes him in, teaching her new guest about life on Earth. This high-tech comedy adventure hit spawned a 1988 sequel.

Does Short Circuit make you nostalgic for the 80s? What did you think of the movie if you’ve seen it? Did you like the sequel? Tomorrow’s movie is a recent ensemble comedy that’s based on a true story. I’ll give you one of the actors in it: Jon Hamm. Is that enough to give you any guesses? Let me know in the comments!

12 thoughts on “A to Z Challenge – Short Circuit”