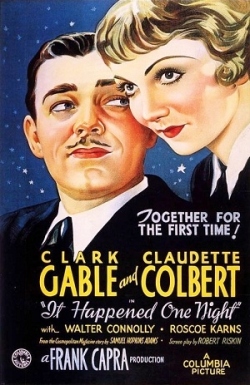 It Happened One Night

Netflix says… Runaway socialite Ellie Andrews (Claudette Colbert) is en route to the Big Apple to elope with a fortune-hunting flyboy. Along the way she meets a crusty newspaperman (Clark Gable), who’s just been sacked and–unbeknownst to Ellie–plans to sell her story to get his job back. But a string of zany misadventures leads them to realize they’re madly–if reluctantly–in love. It Happened One Night swept every major Academy Award.

I haven’t seen all the movies that Capra directed. But after seeing the ones that I have seen, I’m beginning to wonder if he ever made a bad one. I had actually seen this once before. A few years ago I got on a kick of wanting to see every Oscar winner for Best Picture. I started at the beginning of the Academy Awards, but didn’t make it very far. I did get to 1934’s It Happened One Night, though. As rom-coms go, this is a pretty good one, and follows that basic romantic comedy formula. You know, boy meets girl, boy and girl have a couple days of wacky adventures, boy and girl fall in love. You don’t see a lot of romantic comedies winning a Best Picture Oscar. But there was a depression on. Maybe this kind of movie was just what the American public needed. I don’t recommend every movie I see on this list, but I do recommend this one.