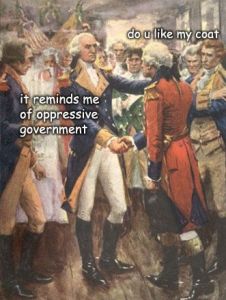 Not long ago, I noticed someone’s Facebook status which made the claim that they would make a bad colonial person. If it was you, let me know so I can give you the proper credit. Anyway, that statement got me thinking: How would I have fared in colonial America? I don’t think I would do any better than my Facebook friend.

I’m sure there are more ways that I could fail at being a colonist. Probably many more. These are just the ones I could think of at the moment. How about you? Would you survive in the colonies during the mid-1700s? Let me know how you’d do in the comments.

BTW… if you do a search for “Adventures of George Washington” on Pinterest, you’ll find all kinds of hilariously captioned images of George. Just something to do when you’re bored.